What the Fuck Is Wrong With You People?

Posted on August 1, 2009 by brianferdman

As I sat at home yesterday, frantically refreshing the Doppler on Weather.com, I wondered how much I really care about Soulive. I used to love this band circa 2000 and 2001, but somewhere along the way, I lost interest. It’s been so damn long that I don’t recall what drove me away, but I think it may have coincided with the moment when they stopped wearing suits on stage. Anyone who has seen my disheveled appearance knows that I’m far from a disciple of the fashion police, but I seem to recall their sound taking a different direction once the suits disappeared. They lost a little of their connection to the old school funk and veered off on a path that no longer appealed to me. Of course, this was all so long ago that I could be grossly misreading Soulive’s history. The fact remains that when it comes to music, I’m a highly judgmental sonofabitch, and when I’m faced with the embarrassment of musical riches that New York City provides on a daily basis, I’m (often unfairly) quick to the cut the cord on a band that has a couple of mediocre shows. Sometimes, it’s two strikes and you’re out.

So the question remained: Did I like Soulive enough to stand out in a deluge of rain while they would play their 10th Anniversary Celebration gig? I had been to Celebrate Brooklyn the night before for a uncharacteristically fair set from Naomi Shelton & The Gospel Queens and a phenomenal set from Burning Spear. It was probably the first time I’d gone to the Prospect Park Bandshell solo, and I instantly made friends while surrounded by every Jamaican living in the city of New York, all of whom made significant contributions to a cloud laced with delta-9-tetrahydrocannabinol that permanently hung over the lawn like the fog in the San Francisco Bay. While Thursday was fun, did I want to take the solo plunge again? Citing the rain and their fear of melting, my Nervous Nellie friends had previously made firm commitments to this show but were now withdrawing faster than a sixteen year old without protection in the backseat of a Ford Escort. For a few hours, I fell under their pessimistic spell until I finally realized that a man who lives a full-throttle lifestyle does not take nights off because of rain. No, sir, it was time to man-up and do this thing.

I didn’t arrive to the park until 9:00, and even though I pleaded with others WHO ACTUALLY LIVE WITHIN WALKING DISTANCE OF THE PARK to join, I was met with pathetic text excuses:

“You’re only gonna see one hour of music.”

Nevertheless, I arrived to see Soulive tearing it up in a nasty way for an appreciative but small crowd. The rain had rendered the muddy lawn vacant, and the puddles on the seats caused everyone remaining to get up on their feet. This all resulted in an excellent dance-a-thon, and Soulive delivered. It had been at least six years since I’d seen a full Soulive show, and either Neal Evans has grown tremendously over that time or I have a terrible memory. In any case, his ability to mimic a bass guitar with the lefthand on his keys is now unrivaled. By the end of the show, he was laying down the most ridiculous, funked-out basslines with a hyperkinetic blazing speed that bass guitarists could only dream of matching. Guitarist Eric Krasno was a perfect foil, displaying aggressiveness and bite, and drummer Alan Evans put some dip in my hip with thumping beats. Rounding out the lineup, the Shady Horns dropped some 1970s-inflected soul into the proceedings, and guitarist John Scofield sat in and showed why he’s still a badass at 57 years of age. 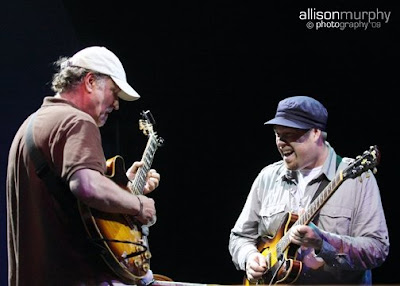 The finale was Stevie Wonder’s “Jesus Children of America” jammed into Sly and The Family Stone’s “If You Want Me to Stay,” featuring vocals from Nigel Hall, as well as Ivan Neville and Tony Hall of Dumpstaphunk, whose set I sadly missed while foolishly debating with the rain. 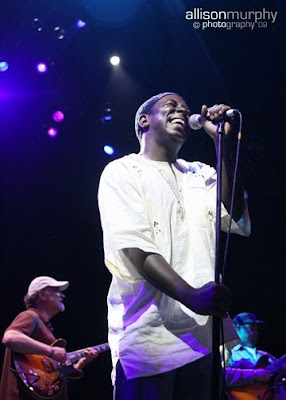 Nigel Hall on the vocals. – Photo by Allison Murphy Photography 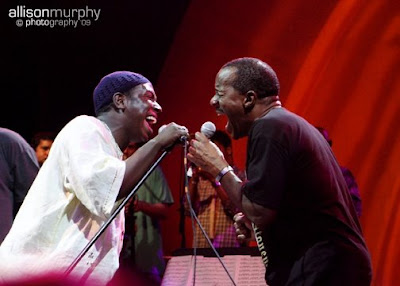 Nigel Hall and Tony Hall get into it. – Photo by Allison Murphy Photography 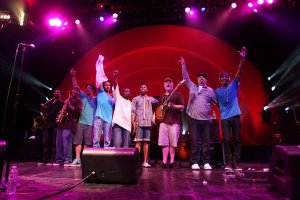 The Grand Finale. – Photo by http://www.ga-photos.com

Download the show at http://www.archive.org/details/soulive2009-07-31 or stream it here:

I was feeling too good to quit now, and after attempting in vain to get some Park Slope friends to redeem themselves and salvage the evening, I journeyed onward to Barbes, the tiny little bar with music that’s the hidden gem of Brooklyn. Someone earlier asked me who was playing, and I responded by saying, “Does it matter?” 90% of my visits to Barbes have featured musicians I’ve never heard of before, but they’re always phenomenal. Last night was no exception.

Scott Kettner’s Forro Brass Band was holding court in the backroom, which was naturally crowded but not uncomfortably so. When I walked in, they were deep in the midst of a sweaty samba jam, and I had never seen a crowd like this at Barbes. Usually, you see a mix of people that are attentively enjoying the music, a couple of dancers, the occasional talker who was dragged there by her friends, and a hipster or two who mistakenly wandered southward from Union Hall. However, last night the backroom was a slithering pit of lithe bodies dancing salsa, cha-cha, and just undulating to the heavily addictive, pulsating percussive grooves laid down by Kettner. The horns added some brightness and flair, and guest guitarist Jesse Lenat brought a rollicking country soul feel to the ensemble. It didn’t take long before they had a whole New Orleans thang goin’ on, and this unique hybrid of secondline, Brazilian, and bouncing blues created a wild Carnival atmosphere in the backroom. The closer of “Big Leg Woman” had everyone doing a crazed strut, and the encore, which was desperately squeezed in before midnight, had us all singing on a full-throated call-and-response to “When I Lay My Burden Down.” It was a highly charged ending to a great night of music, a stellar evening that would be capped by slice from Smiling Pizza and a miraculous appearance by the ever-elusive G-train.

I only wish some of you people in Park Slope could have gotten off of your lazy asses to experience it!

This entry was posted in I'mtiredofyourfuckingexcuses, music, pizza, Soulive. Bookmark the permalink.